St. Stephen’s Day commemorates the first Christian saint known for self-forgetful help to the poor and the spread of Jesus's teaching. Barely 30 years old, Saint Stephen died as a martyr, stoned to death. The Christian church commemorates his outstanding deeds with the dedicated holiday on December 26th. Over the centuries, with the spread of the Anglican, Protestant, and other Christian branches, St. Stephen’s Day holiday became an international phenomenon, a calendar staple, and a public occasion in most of Europe and many other countries globally.

Saint Stephen was a young priest who lived in the first decades of AD. Deeply impressed with the teaching of Jesus Christ, Saint Stephen started preaching his wisdom to the visitors in his temple. History tells that for this he was called to respond in front of the highest board of priests, interrogated, and then stoned to death on the streets of Jerusalem.

As Christianity has risen in the Old World, St. Stephen has won a lot of hearts over the span of the Dark and Middle Ages. St. Stephen’s Day, along with Christmas, was a pre-winter feast in medieval life. Already a good party with all the meat and ale, it got even better when it became a common date for weddings and matchmaking.

In 1947, everyone’s favorite martyr’s day became a national event in Italy, streamlining the Christmas week vacation for the millions of happy Italians and making St. Stephen more popular than ever. By today, more than 20 countries have recognized St. Stephen's Day as a public holiday.

Though sometimes mixed up with the Boxing Day, the St. Stephen’s Day holiday is a separate concurrent activity. It is seen as a louder and more cheerful period of the Christmas week, a day to celebrate the uplifted anticipation of the New Year.

The traditions for St. Stephen’s Day differ around the world. Being one of the most ancient holidays it has brought to life rituals both quirky and beautiful. Among the countries with the most distinguishable celebratory ideas are Germany, Ireland, Finland, Italy, and Catalonia.

“Wren hunt” is a macabre Irish tradition. On St. Stephen’s day, groups of boys would go out in the fields to hunt for a wren, a little bird. After an exhausting chase, the boys would dress in the straw costumes, dance, and demand gifts for the bird’s feathers. This tradition is still alive in Ireland, making up for quite an eerie part of the internet images.

In Finland, December 26th is called Tapaninpäivä, it is a national holiday and a popular occasion for the families to ski or skate together. In the olden days, the whole village would go for a fun sleigh ride. And you can still do it today—check the “specials” in the Finnish winter resorts itineraries.

In Italy, the religious side prevails. Though cities run parades and special masses on St. Stephen’s Day, social media will be quiet, as the day is considered devoted to family time. If still going for it, the Instagram lovers will post the cozy home looks from their coaches, or photos from the long walks.

In Catalonia, Sant Esteve Day is widely acknowledged as an extension of Christmas. The reason is that in Catalonian Pyrenees you are extremely likely to get snow-buried in your parents’ house for at least a week after Christmas! This funny climate fact became a perfect excuse for yet another hearty dinner of leftover-stuffed cannelloni.

St. Stephen’s Day is a quiet family holiday, so do not place any noticeable part of your media budget allocated to the online ads with this hashtag. If you’d like to jump into Christmas Sales on the 27th, look into promotion under the Boxing Day brand.

Try to share information with your customers on this day in touchpoints like a sports event, a Christmas market, a holiday getaway, or their favorite influencer feed messages. But stay aware! Few businesses can come up with the deals that will be an authentic fit for St. Stephen's Day.

If you feel that there is no connection between your brand and the occasion, don’t force it. What you still can do is look into St. Stephen’s deeds and quotes and share one with your followers. Such a simple greeting will become an invitation to build a meaningful relationship with you.

Dark Gold—the staple color of the iconic and religious paintings, the dark gold represents the meaning of this church festival. Use it to add a zing to your logo.

Red—the red color clothes and decorations are common for St. Stephen's day to symbolize his violent death. Do not mention it in the slogans.

Blue—the blue tint adds to the classical Italian color tradition, while also marking the darkness of the wintertime in North Europe.

Black—one of the primary design colors, black becomes the dramatic backdrop for the enlightened meaning of St. Stephen’s story. 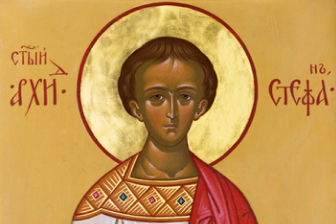 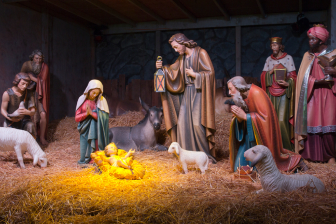 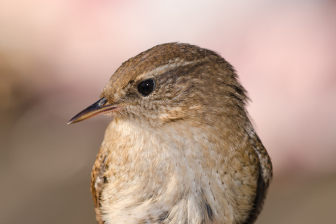 St. Stephen, the young priest who lived in the 1st century AD, gave his name to the definition of this unique celebration. He is commonly depicted as a timid lad holding three stones and a palm leaf.

Nativity scenes are very symbolic of St. Stephen’s Day, especially in Italy. The tradition is for the families to get out of the house after the Christmas frenzy and visit one of the town squares with a nativity picture or sculpture. Well worth the appreciation, these intricate installations can be made out of clay, paper, or even arranged by actors a.k.a. “living pictures”.