Yom Kippur, or the Day of Atonement, is Israel’s holiest celebration, a day of purity and closeness to God. On that day Jews would abstain from food, drinks, marital relationships and instead spend the day praying for forgiveness.

The history of the event goes back to the times of Moses. God saved Jews from slavery in Egypt, and Moses went on the top of Sinai mountain to receive instructions from God on how to live next. To his surprise, an unpleasant one, after he came down carrying the heavyweight wisdom of ten Amendments, he found out that his people began to worship a golden calf. Moses was furious, he broke the stone tablets with God’s laws, burned the false idol and returned to the top of the Sinai to ask God for forgiveness. He received it on a day that is now known by the name of Yom Kippur.

There is a tradition for the family to run a food feast before the sundown of Yom Kippur. To build enough strength for the upcoming fast.

Many people stick to strict fasting during Yom Kippur, when any food or drink is prohibited.

There are some exceptions for traditional Jewish. If fast will put your life or health in danger—just don’t do it. If in doubt—consult with your rabbae. Kids under 13 and pregnant women are not expected to fast either. Anyway, this tradition is not about ending up dying from lack of water. It’s more about testing yourself, clearing your body and soul and reflection on your sins, if you have any.

People go to synagogues where they receive 5 prayer services. Yom Kippur is the day when married men wear special clothing—kittels. It’s a white robe for very special occasions, that can serve as a groom outfit for the wedding or as a burial shroud.

It’s a tradition for Jewish people to wear white or light colors during Yom Kippur as a symbol of purity.

People are not allowed to work. Except for Police, Fire and Emergency Departments. Some schools get a day off too.

To stay pure people are banned from cosmetics, even lotions. No shower or bath, too. Ban for drinks expanses to water ban in general. Obvoiusly no sex. And the most mysterious yet serious prohibition during the Yom Kippur: for what it's worth, do not wear leather shoes.

Yom Kippur is a big Jewish holiday and some traditions may differ depending on the country. In Israel, Yom Kippur is a favourite kids’ holiday. Its popularity is immense and goes with a higher rating compared even to the Rosh Hashanah (Jewish New Year).

There is no catch here. Just absolute love and freedom. Freedom on the roads. Cars are banned for Yom Kippur along the whole country. The exception is made only for police cars, fire trucks and ambulances. People go on foot and ride bikes. Actually, Israel residents even renamed the event into a Bike Day and many families or friends go on a bike trip or just wander on foot around the country.

After the fast is over families get together for breakfast to celebrate their pure sinless life.

A very spectacular tradition with almost voodoo elements. A person swings a live chicken over its head while reciting a prayer. Then this chicken or the money value of it goes to people in need.

When you decide to bring your brand closer to Yom Kippur, just keep in mind that you don’t wish a Happy Yom Kippur. This event is not about ordinary festive happiness. It’s about being reasonable and diligent.

It’s appropriate to say something like “Have a Meaningful Yom Kippur!” or “Have an Easy Fast!”—is another phrase that gets you in the right trend.

Needless to say that this event is all about being good and doing good to others. All kinds of volunteering, sponsorships or charity events a few days before Yom Kippur are great for you and your business.

#ffffff
#00bfff
#0000ff
#b7871e
White is the main color of the holiday clothes. It stands for purity and sinless life. Blue is a symbol of divinity, as the sky, the God’s home, is blue. Blue is also a prime color of Judaism in general. 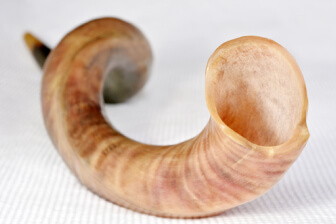 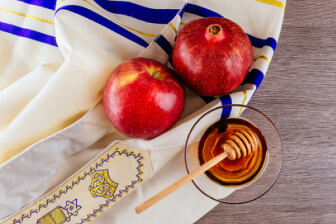 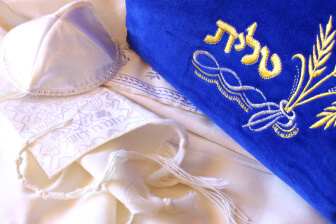 Pomegranate
Shofar, a ceremonial musical instrument made from a ram’s horn. A shofar loud signal in a synagogue proclaims the end of services and fast. Kittel, a special ceremonial white robe is one of the main Yom Kippur symbols.