This is a big and distinguishable holiday in Mexican communities around the world. Those who celebrate make Day of the Dead a joyful event—they build bright altars for the deceased and bring their favorite foods to the graveyards.

Some date the celebrations’ origins to the pre-Columbian period and three-thousand-years-old Aztec cultural rituals. There is information about Spaniards coming across Day of the Dead when they arrived in the 16th century. Still, the observance as we know it today happened mostly in modern history.

Honoring the dead has been extremely widespread among the indigenous population in South America. It became more popular in towns and cities in the 1980s due to the rising urbanization. Around the 2000s, it trickled to the southern US—San Diego, San Jose, Los Angeles—with the Latino diaspora.

In 2008, the “festivity dedicated to the dead” was officially acknowledged by UNESCO as the event of intangible cultural heritage, the first of such practices in Mexico. The definition of this unique celebration is rather fluid since it takes on the new features as it spreads worldwide. By skipping older rituals and adding the new ones this holiday keeps evolving.

A fun fact. In 2015, a fake Día de Los Muertos parade had been staged on the streets of Mexico for the James Bond production, “Spectre”. The quotes from the excited moviegoers inspired dwellers of Mexico to establish an official parade next year, driving tens of thousands of international tourists to Mexico City.

As Día de Los Muertos goes more mainstream and global, the traditions become less about grim origins and more about the carnival. Recently, Disney has put an extra spin on its meaning for pop culture by doing happy musical Coco under their logo. It opened wide the new family market for the Día de Los Muertos messages and seasonal deals.

The illuminated Ofrendas are beautiful traditional family altars. You’ve probably been coming across photos of these on Instagram. Several levels are adorned with the fabric, bright orange Aztec marigolds, and candles. The portraits of the late relatives in their best clothes are surrounded by food, drinks, sugar skulls, and emotional knick-knacks.

It is believed to be offensive for the dead if living is mourning on that day. So instead of weeping, the families consider this an invitation to have fun, sing and dance, laugh, drink, eat, and show their love to all relatives dead and alive.

Throwing a feast is common on this day, and the menu list runs. Original Day of the Dead specials will impress you—candied pumpkin, tamales, and sweet milk fudge are just a few to name. Across both Americas, the traditional Pan de Muerto is baked in the households, while in diasporas the bookings in Mexican restaurants spike.

It is hard to overrate Día de Los Muertos’ social media marketing campaign’s importance for the Hispanic market. The niche promotion based on the precisely targeted ideas has proven to be bringing in hundreds of thousands of dollars in revenues. It is a must-have staple on the marketer’s calendar, in particular, if you manage family goods, foods, gifts, or decor business.

Day of the Dead’s influence is noticeable on the US national market, where it drives engagement from California to Chicago. Here the carnivals, parades, family get-togethers, and cooking festive foods get as much as 28% of the population involved.

Some countries have their own traditions, and there’s no shortage of funny ways to turn them around. In Guatemala, for example, flying kites are a symbolic picture of the Day of the Dead. It is believed that kites help souls to communicate, so it already sounds like a great referral campaign.

Día de Los Muertos is celebrated on All Saints Day and All Souls Day, two appreciation days to mark the death. As you would expect, black is the leading color here.

Red is everywhere as the balance color for black. It is traditional for the beautiful headpieces worn on the Day of the Dead to be red.

The vibrant blue hue shines with the cyan in the night, making it irreplaceable for the altar decorations and Calaveras. 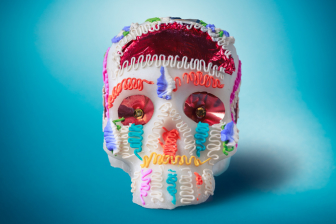 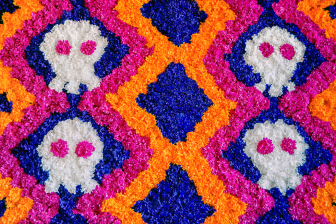 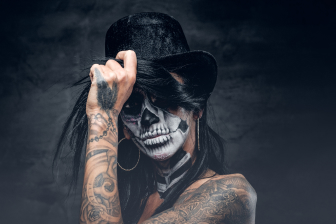 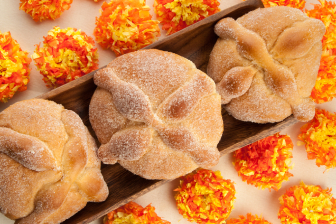 Sugar skulls—a symbol of good luck, knowledge, and enlightenment. Sugar skulls are must-have for a proper Día de Los Muertos party. Search for the recipes to make them yourself.

Bright flowers—the Aztec marigold, a ruffled orange flower, decorates altars and graves on the Day of the Dead. People believe that their vibrant color and strong aroma help the souls to find a way to the party.

Calaveras makeup—the intricate iconic skull makeup became the staple of the holiday, driving thousands of coloring pages, costume contests, and makeup bundles sales. No wonder that on this day you will see them everywhere from cookies to Google doodles.

Pan de Muerto—the traditional sweet yeast bread baked on this day in all the households. It is a beautiful round loaf with the shapes of the bones on top. This sweet and rich bread is good when eaten as is, and divine when dipped in milk. 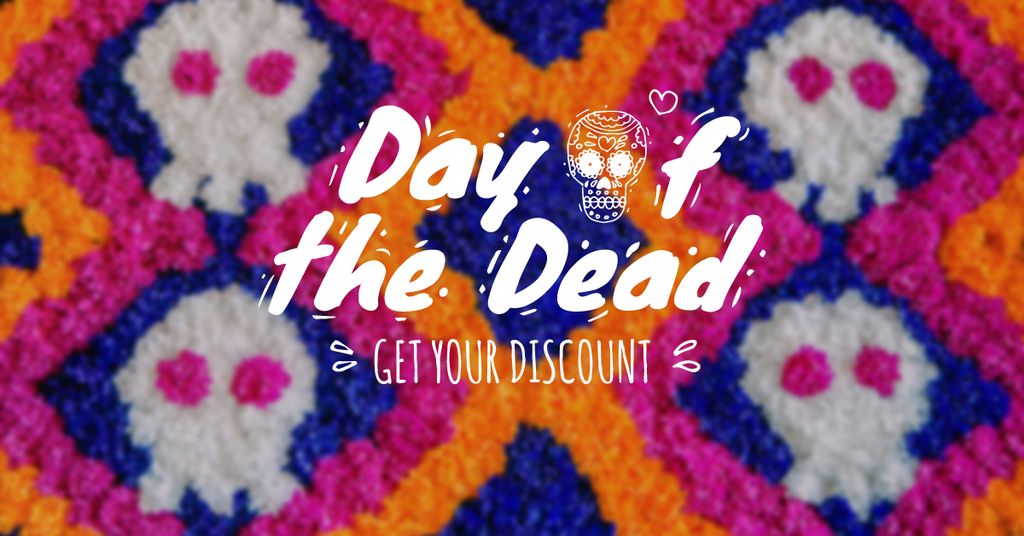 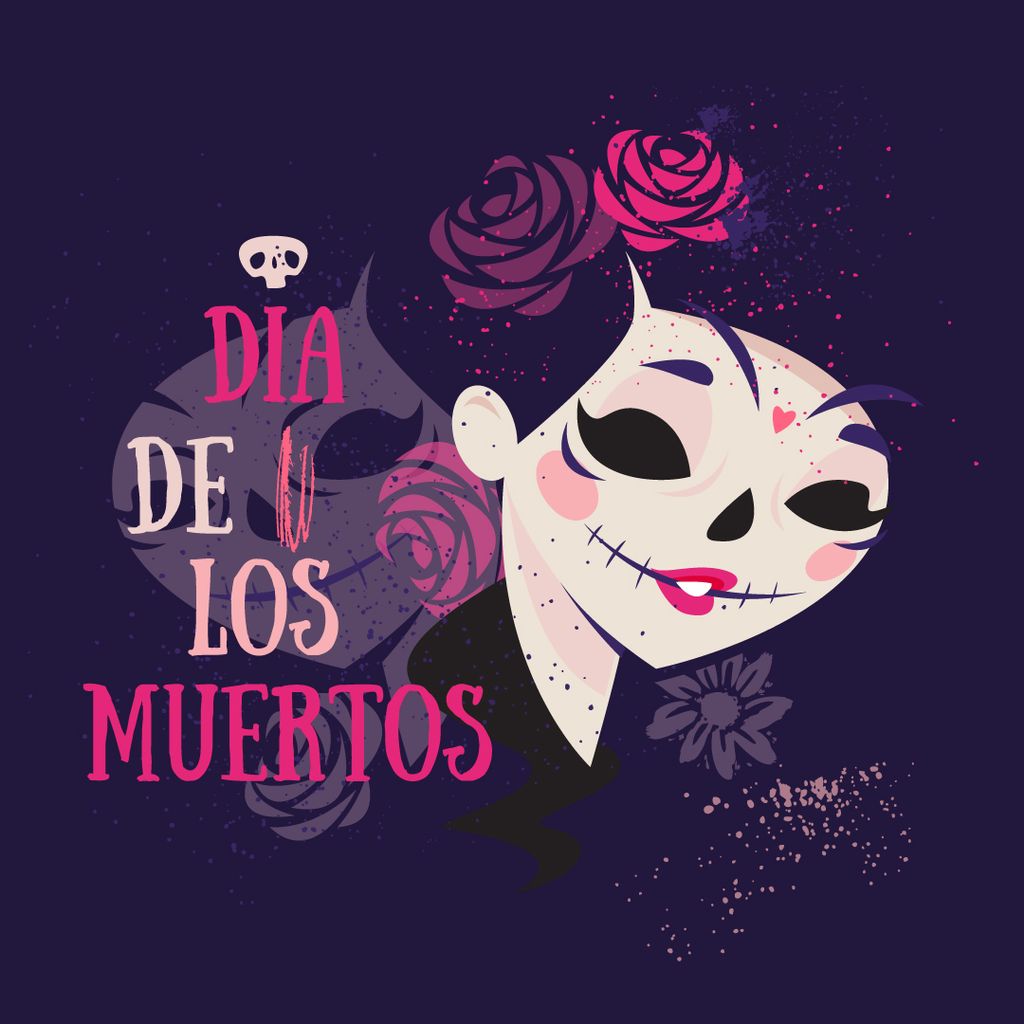 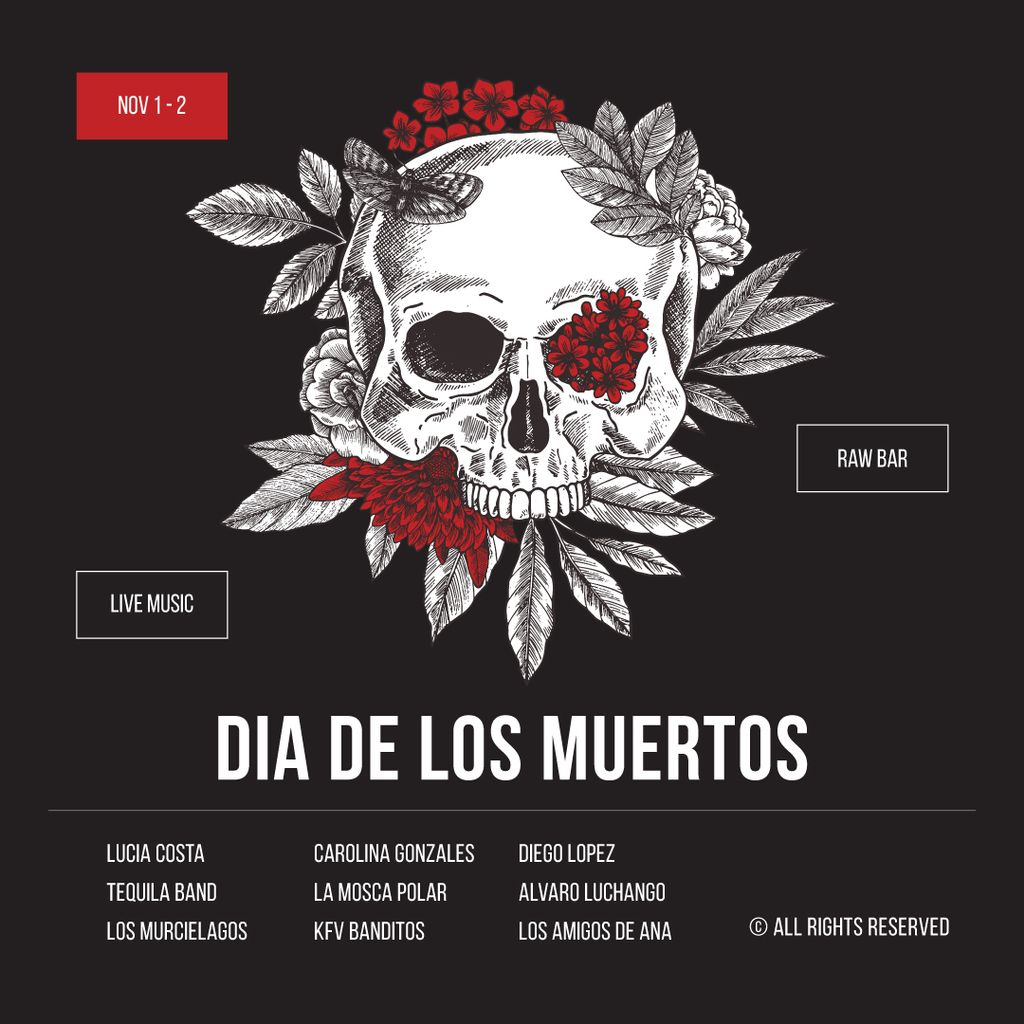 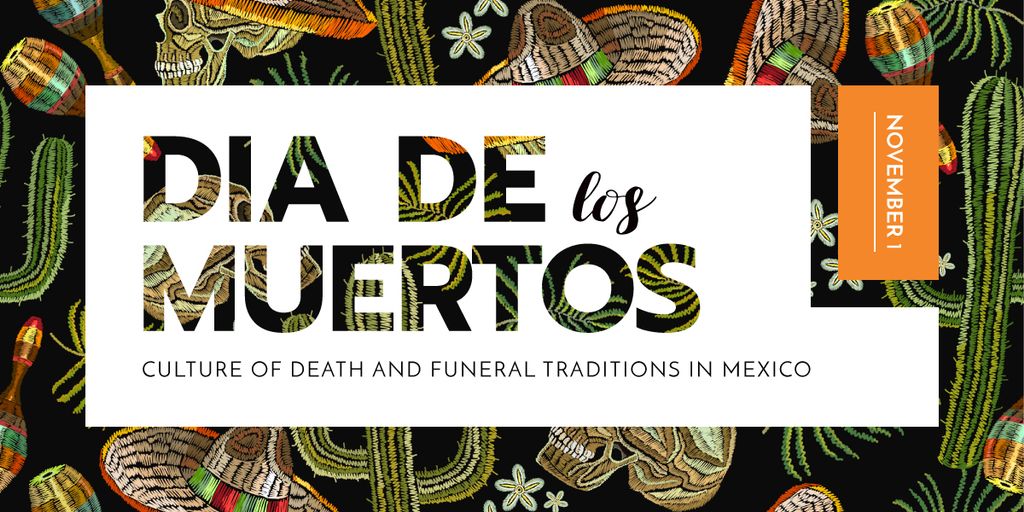 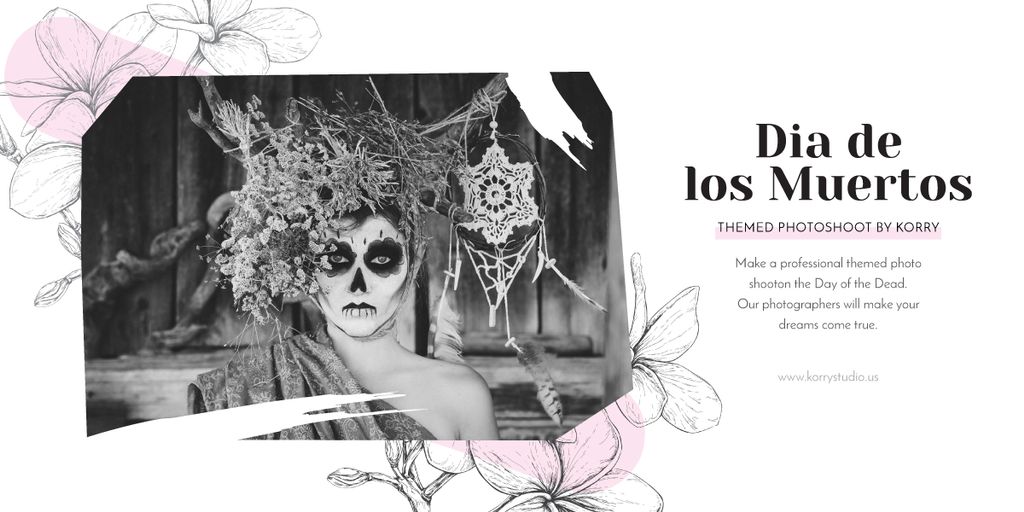 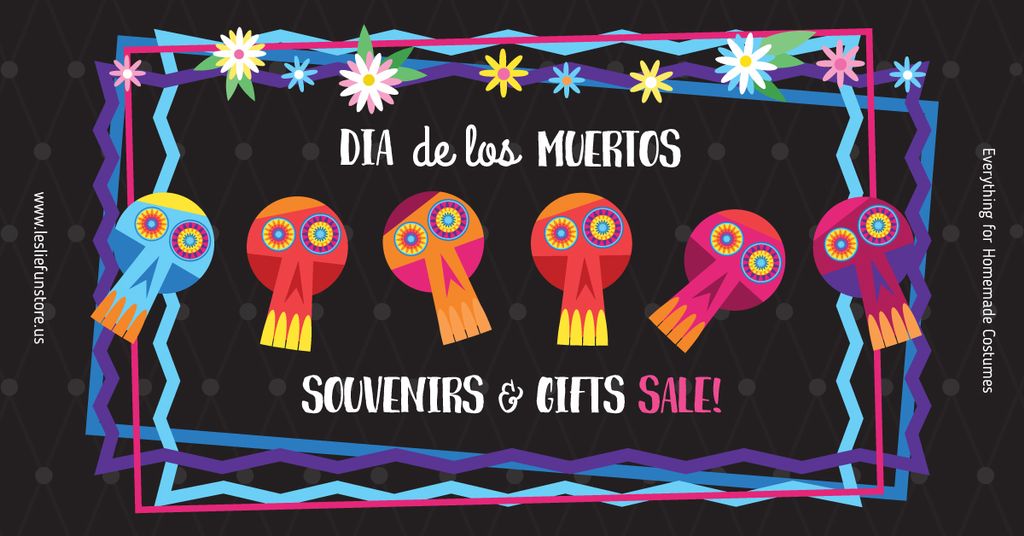 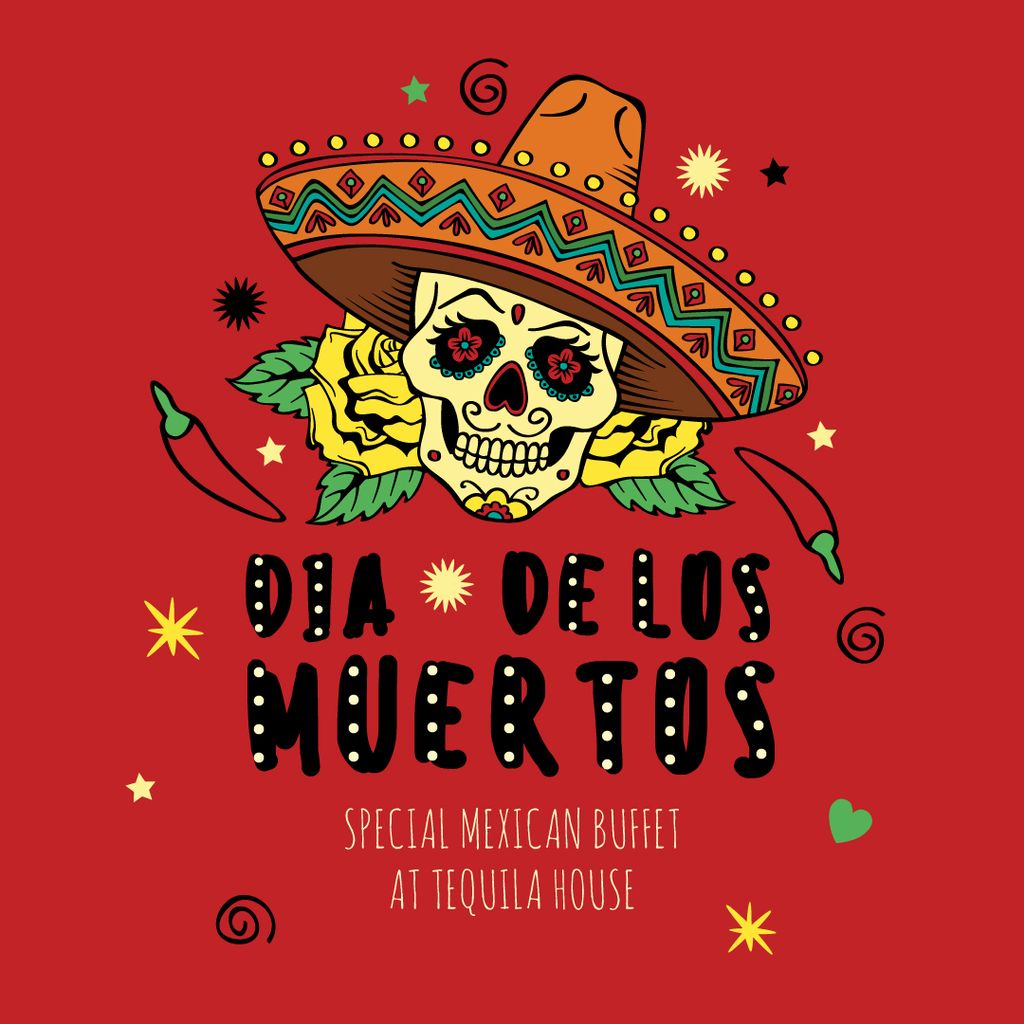 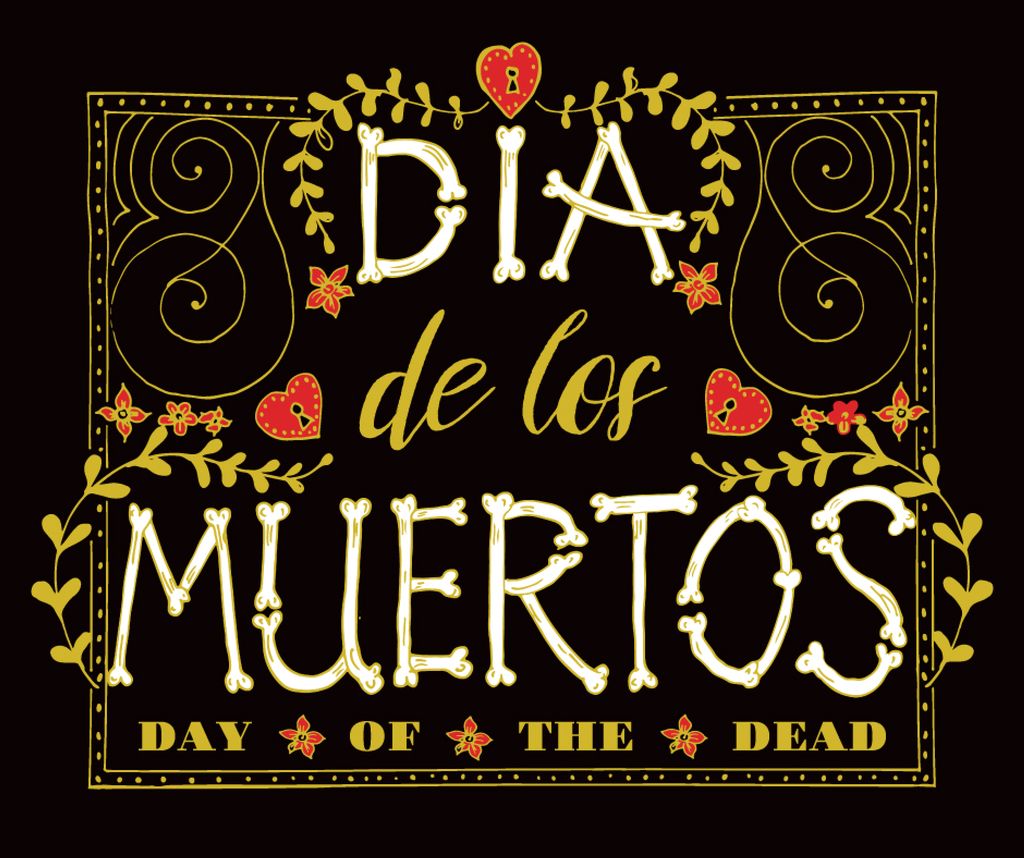 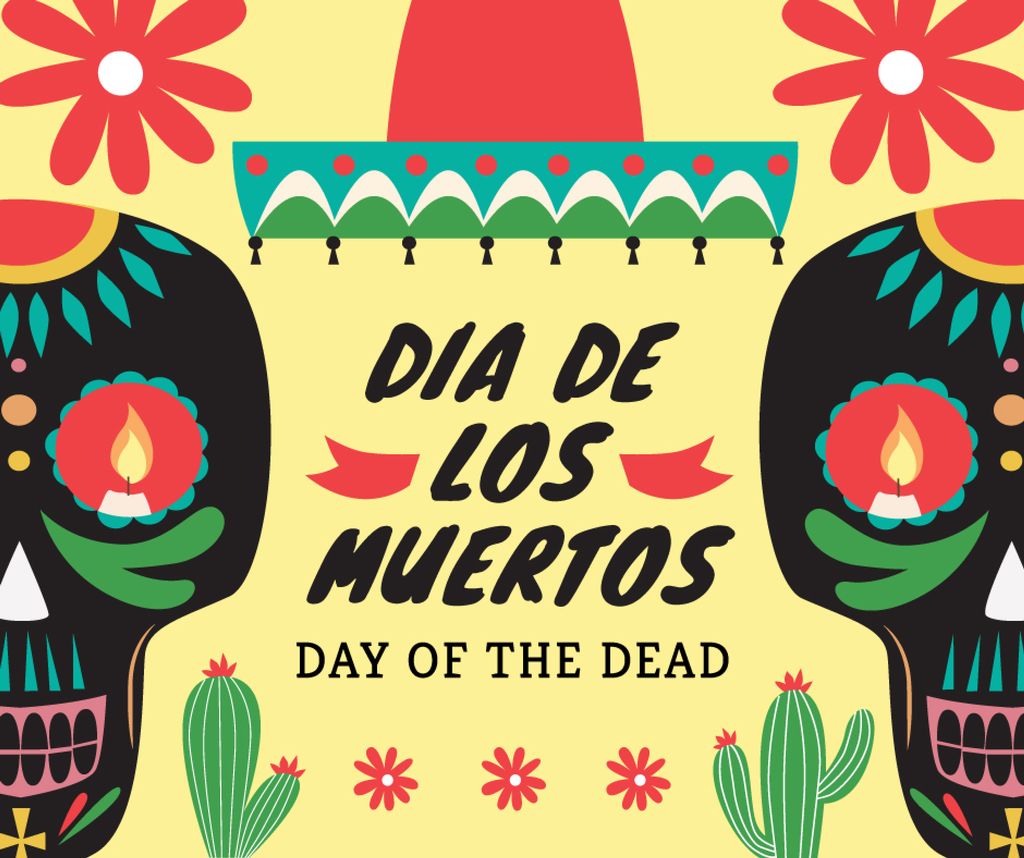