Columbus Day was celebrated to mark Christopher Columbus’s arrival to the shores of the New World on the 12th of October in 1492. After causing controversy over the 20th century, it has been changed into the Indigenous People’s Day.

Columbus Day Holiday marks the 12th of October 1492. That’s when, after seven long years of tirelessly pitching his ideas to the various kings and queens, and only 36 days of sailing to the West across the Atlantic, Christopher Columbus had set his foot on the Bahamas Islands and opened the Americas to the European colonization.

Until his very death, though, he denied this information and insisted that what he discovered was the part of the Asian continent explored before him by Marco Polo.

In the USA, the rise of Columbus Day to being signed into the Federal holidays register in 1907 is linked to the influential Irish Catholic political organization of the period, Tammany Hall. It has been also saluted as an Italian-American heritage holiday over its history.

The parades organized by Italian diasporas have been extremely common from 1869 till the 1970s. Nowadays, the new generation readily takes Columbus off the pedestal but immediately puts on the whole bunch of famous Italian-Americans from Frank Sinatra to Madonna.

In most countries of Latin America, Columbus Day had been known as Día de la Raza or The Day of the Race, honoring the diverse roots of the Hispanic population. Nowadays the number of South American countries from Mexico to Chile join the movement for changing the definition of the holiday in appreciation of the indigenous experience.

In South America, the rituals are called to celebrate the ancestors, and most of all celebrate life to feel their blood pumping in your veins. Across the Latin countries, the cooks serve the most fragrant and hearty traditional dishes on that day – tamales, pastilla, tacos, and of course chocolate. By far, the whole world owes one for the mind-blowing foods that drive people crazy on the international scale.

Columbus Day in the US is a federal holiday. Since 1907, it meant that while the federal offices and courts were closed on this day, other activities, national parks, most businesses, and retail stores were open as usual and greeted the happy occasion with deals and parades.

The looks of the holiday had shifted a lot since the 1990s, though. The second Monday of October became the observance for the years of mistreatment of the Native Americans by colonists. The patriotic posters greeting Columbus and the explorers that existed since the mid-1800s changed into photos from marches and rallies, while the rise of social activity started telling the story from Indigenous people’s point of view.

Scheduled for Columbus Day social media campaigns under #RethinkColmubusDay and #IndigenousPeoplesDay always get a spotlight moment for the humanitarian activists to draw us all a picture for possible improvement.

Columbus Day is not really on the spending map for the Americans, being rather of political meaning and heritage recognition. However, it is utterly important for the brands working in the educational and inclusion fields to not oversee the opportunity here.

Think beyond gifts promotion. Send an invitation to your followers to unite through funny social sharing on this day. Why not advocate all things that excite you in the authentic Indigenous culture? For example, the unique harmony with nature and minimalistic sustainable philosophy are just two features that modern people struggle to bring back into their lives.

The ideas and messages conveyed by the greatest personas whom we owe the Indigenous inheritance to, make the most powerful quotes ever written. Take another look at them – maybe you will find something to reinforce your brand’s slogans on the way.

#ff0000
#0000ff
#00bfff
#ffffff
The white-red-blue navy palette is common for this day. Red is the dynamic color that adds the action to the Columbus Day designs. Expect lots of blue in the decorations, post headers, story updates, and newsletters. The more saturated deep blue hue is used in more classical and expensive-looking designs. White is one of the two most important colors. A go-to solution for a quick modern-looking design fix. 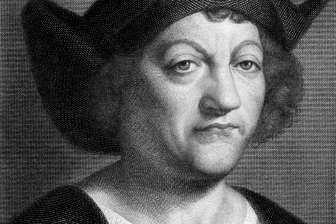 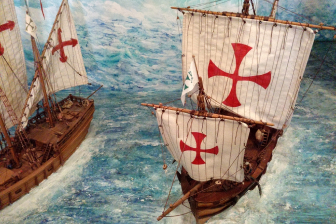 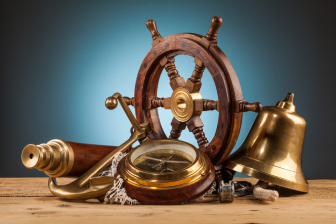 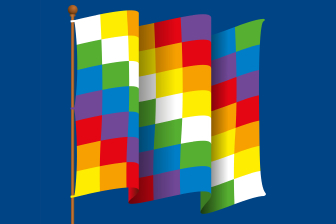 Christopher Columbus – a controversial head-runner of Columbus Day. A Genovese traveler who lived in the 14th century and was the first one to the shores of the “New World”.

People – The people of various shades of skin holding hands are a vibrant symbol of the day, often used as a logo by the organizations and community festivals.

Santa Maria – Columbus’s iconic flagship with red crosses across the curvaceous white sails is among the most recognizable images of America’s exploration.

Steering Wheel – A symbol of the Discoveries era, the old-fashioned steering wheel became a staple for the Columbus day party flyers and menu specials.

Wiphala – This vibrant quilt-like flag symbolizes the union of the Andes tribes of several Central American countries. This novel symbol of Indigenous People’s Day is so Instagram worthy, we could be posting it all year round.