Though bloody, the storming of the Bastille on July 14th in 1798 was a triumphant culmination of the French Revolution. Since then, it became a matter of honor for every French to celebrate this day with truly Gallic pride and scale.

By the end of the 18th century, widespread poverty urged the creation of the National Assembly in France, where representatives from people made demands for fewer taxes and more freedoms. The king, though, didn’t hurry to follow the proposals made by people. After the months of delays, he fired the widely supported Finance minister, a decision which had backlashed with massive protests and looting throughout Paris.

On the 14th of July, the insurgents supported by part of the city guard had set their eyes on the heavily stocked armory in the fortress of Bastille. After several hours of battle, the grim symbol of royal power fell. To wipe the very memory of the old regime, after the Revolution Bastille has been demolished and stones used to pave the streets.

In Paris, this morning starts off with the biggest and oldest military parade in Europe. Join the crowd stretched along the Paris sidewalks to see almost ten thousands of marching cadets, troops and marines, 240 horses, and over 80 planes and helicopters. They move down the Champs-Elysees to receive a greeting from the President of Republic and foreign diplomats at Place de la Concorde. The ceremony lasts for several hours, and it’s a popular TV staple that kicks off the day. It is followed by massive celebrations across French cities, towns, villages, and settlements.

As one could expect, the biggest French holiday simply cannot be digested without washing it down with the liters of the finest “le vin Francais”. There is no particular traditional food for Bastille Day, as long as you stick to French cuisine. To have a genuine meal experience, start this day with a croissant and coffee, and later call your friends to a picnic. For the picnic basket, choose staples such as baguettes, pâté, camembert, and onion confiture.

Direct marketing is just the tip of the iceberg during this period. Tour de France producers attract five huge sponsors for the race itself. Over 300 other brands get involved through sponsoring the competing teams. Among these are the behemoths like Emirates airlines and Movistar—understandable, considering that the team budget for a year can reach 15 million Euro.

The Tour de France sometimes gets named a successful content marketing case with great ideas behind it. The event’s stages create a natural storytelling grid to be filled by champions, fans, and brands. Memorabilia and cross-promotions are perfect for the sports-centered businesses, yet you could look at it even if you’re not in sports. Think the lifestyle, travel, fashion, beauty, celebrities, or Instagram—all of these have had their place in the Tour de France centennial history.

Why not run your local cycling-themed event? A toddler bicycle race? A grassroots charity hashtag activation? Summer is a great time to bump up your messages, while the timing of Le Tour makes it perfect to set a date for community marathon, business boot camp or summer camp.

Celebrate the perseverance and fierce reach out for excellence, two staple features of Tour de France, in your materials on this day to bring the glory of this championship to your audience.

Red, blue and white, the colors of the French national flag, are the main official colors for Bastille Day. According to the information from historians, the white was the color of King on the flag, while the red and the blue were the colors of Paris.

Which of these to choose as your primary color? The answer is simple—blue. It is, in fact, the favorite color of French. 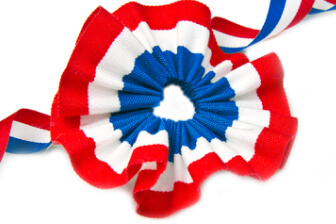 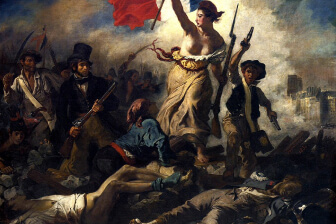 “Liberty Leading the People” by Delacroix 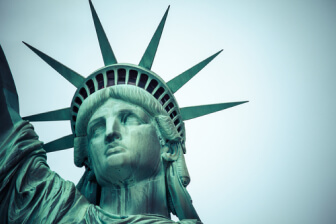 Tricolor rosette banner, pinned to the jacket or hat, became a quick DIY rebel badge on the days of Revolution. The maids and seamstresses whipped them up on a string for their lovers marching on the street.

The painting “Liberty leading the people” by Eugene Delacroix was created in the Age of Enlightenment, thirty years into the Revolution. It became a canonical picture to embody the Bastille Day spirit.

Lady Liberty herself is an important lady in both French and American history. A century after the initial storming of Bastille, the famous present of Statue of Liberty has been given by France to the United States.